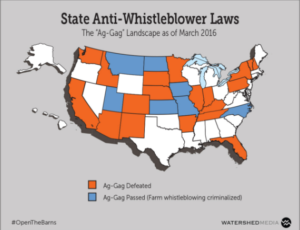 Parts of Idaho’s “ag security law” or, better known as, an “ag gag law” were upheld by the Ninth Circuit Court. Previously a federal court had ruled the law in its entirety was unconstitutional, which was appealed by the state of Idaho. Still, this was a win for the Animal Legal Defense Fund, which persisted in its attack on the law, and a loss for the state of Idaho. The Ninth Circuit court agreed with most of the earlier federal court ruling and was highly critical of certain key aspects of the law noting, “[subsection of the law] was staggeringly over-broad and that the purpose of the statute was, in large part, targeted at speech and investigative journalists.” The Ninth Circuit also upheld the lower court’s ruling that audio and video recordings of a production facility’s operations cannot be banned, as the law had attempted to do.

Ag Gag, is a general term first coined by Mark Bittman (2011) in a New York Times column to describe laws that provide extra protection to the animal agriculture industry, specifically laws that focus on limiting collection of data that could be used to show the industry in poor light.  Ag Gag laws are one answer the animal industry is turning to in an effort to prevent videos, showing agriculture through an unpleasant filter, from being captured and released. Such laws have been introduced in 26 states and exist in seven.

There is no doubt animal agriculture has been under assault. This has led to a resurgence in the “Ag Gag” law. However, this comes with a significant price, an erosion in consumer trust. Consumer and Media Insights regarding Ag Gag Laws indicates consumers see these laws as evidence the ag industry has something to hide and increases negative sentiment towards animal agriculture. The lack of trust is compounded with taxpayers now being responsible for defending these bills.  For example, Utah’s failed efforts cost more than $350,000. Additionally, these laws are shown to increase positive sentiment for animal rights groups. Media is overabusewhelmingly against the laws and have joined lawsuits against, citing free speech concerns.

If Ag Gag laws turn consumers against the animal ag industry, then what is the answer? First, ensure egregious  doesn’t occur. Though it is tempting to claim, few of the undercover videos have been staged; rather they are capturing what is happening on farms. In some instances, such as the video that prompted Idaho’s ag security law, they capture egregious abuse. It is not surprising consumers are then filled with distrust for animal agriculture’s efforts to create these laws. What can animal agriculture do instead? We need to create a transparent message that highlights all the good things we are doing for animal welfare. There is a good story to tell. This is a long-term goal that will take a lot of hard work, but the payoff will be worth it.