Several agriculture groups, including the U.S. Poultry & Egg Association on behalf of itself and the other poultry associations, including UEP, filed a motion to be able to defend the U.S. Environmental Protection Agency’s rule exempting agricultural operations from onerous reporting requirements for air 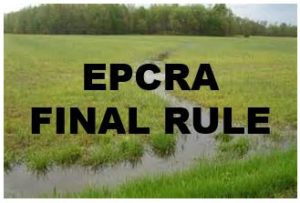 emissions from animal waste under the Emergency Planning and Community Right-to-Know Act (EPCRA). Other groups that were part of the motion are the National Pork Producers Council, the National Cattlemen’s Beef Association and the American Farm Bureau Federation.

The groups are seeking to intervene in environmental groups’ lawsuit seeking to overturn the current exclusion of egg operations and other animal feeding operations from requirements to report ammonia emissions to state or local emergency response authorities under EPCRA. Legislation passed in 2017 excluded these emissions from federal (CERCLA) reporting, which is understood without any reservation by EPA and many legal authorities to extend to EPCRA reporting given the way the two statutes are linked. But the lawfulness of this CERCLA-EPCRA linkage has been disputed, as has the related rulemaking and guidance issued by EPA.

That dispute is playing out in the Federal District Court for Washington, DC, in a multi-year effort to force concentrated animal feeding operations (CAFOs) to report under EPCRA. The legal fight, formally between environmental groups and EPA, has been dormant, but in May the Court issued an order that left active one of the environmentalists’ challenges to EPA’s EPCRA guidance.

The legal elements of this situation are complicated and confusing, but it does bring into question the 2017 law and EPA rulemaking regarding its implementation.  This EPCRA suit is now expected to proceed to summary judgment briefing. Please contact UEP if you have questions. (See Rural Empowerment Association for Community Help et al., v U.S. Environmental Protection Agency et al., case number 1:18-cv-02260-TJK.)