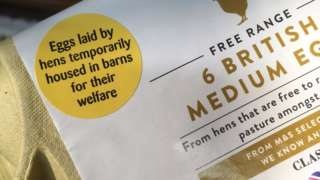 Supermarkets in the United Kingdom (UK) have re-labeled free-range eggs to say they are laid by chickens 'housed in barns.’ The status change is due the high pathogen avian influenza (HPAI) outbreak that has forced farmers to keep poultry inside since early December.

Amidst the outbreak, producers had continued to label eggs as ‘free-range' due to an European Union loophole that allows poultry goods to be marketed as such for up to 12 weeks if birds have been kept inside for their own protection. This grace period is now up, and labels have begun to appear on egg cartons in supermarkets to inform customers that hens are not currently free-range. According to the Daily Mail in the United Kingdom, the re-labeling appears to have caused confusion among those concerned about care inside the barns for hens previously allowed to roam outdoors. Consumers are also questioning supermarkets about why they have “caged hens,” showing a lack of public understanding of terms for various housing systems. For more, see this BBC News report.