Prop 12 Challenged by NAMI and National Pork Board 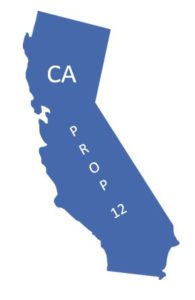 On November 22, U.S. District Judge Christina Snyder indicated she will not issue a preliminary injunction against California’s Proposition 12 as requested by the North American Meat Institute’s (NAMI) legal challenge to the law. According to an MSN report, the judge noted the measure applies evenly no matter where production takes place and found no serious argument that it substantially burdened interstate commerce, even if it denied the trade group the “preferred, more profitable method of operating in a retail market.”

On December 5,  the National Pork Board and American Farm  Federation filed a lawsuit on behalf of the pork industry challenging Proposition 12, largely citing the Commerce Clause. The lawsuit states that California does not produce enough pork for the entire state and thus impacts pork production in other states. The lawsuit also targets the ballot initiative process stating “Because Proposition 12 was a ballot initiative, it was passed without any semblance of meaningful legislative deliberation, let alone inclusive input and inquiry into the impacts of its requirements on national commerce in pork, on the pork production industry, or even the welfare of sows.” Read more in “Pork Industry Sues Over California Law on Animal Confinement,” from The New York Times.

On December 2, a federal judge issued an injunction against Iowa’s Agricultural Production Facility Trespass Law, commonly called the “Ag Gag” law. The updated law was passed by the Iowa legislature a few months after an injunction against the original law. According to the Des Moines Register, the legal challenges to the two laws will move through the courts separately.

Cruelty to Animals a Federal Crime

President Trump signed a bipartisan initiative that makes it a federal crime to purposely engage in “intentional crushing, burning, drowning, suffocating, impalement of or other serious harm to living non-human mammals, birds, reptiles or amphibians.” The law is an expansion of the federal law banning “animal crush videos.” The law also notes, in general, it does not apply to customary animal agricultural practices, hunting, slaughter or euthanasia.