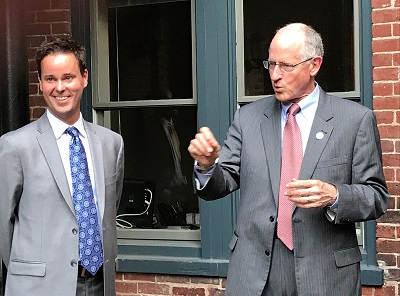 Three Members of the House of Representatives addressed egg farmers and allied industry during the UEP Legislative Meeting in Washington, D.C. The Chairman of the House Agriculture Committee, Representative Mike Conaway (R-TX), joined UEP for a reception and fundraiser at the office of Cornerstone Government Affairs. Conaway spoke to the large gathering about the 2018 Farm Bill, as well as ensuring that lower-income Americans have affordable food and allowing for a consistent labor force for agriculture. Congressmen Robert Aderholt (R-AL) and David Rouzer (R-NC) spoke during the UEP meetings at the Hyatt Regency. Aderholt serves on the House Committee on Appropriations that has jurisdiction over funding of federal government operations, and he supports greater transparency, accountability and oversight to the appropriations process as Chairman of the Subcommittee on Agriculture. Rouzer is a Member of the House Ag Committee and Chair of the Subcommittee on Livestock and Foreign Agriculture.