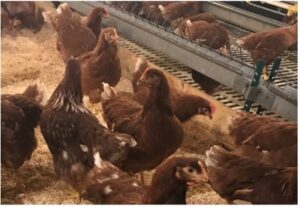 Compared to previous months, December detections of HPAI slowed to 25 commercial detections for all species. However, the egg industry experienced four detections affecting 3.8 million birds in CO, SD, and WA. 34 backyard detections were also noted during December, and 2022 avian influenza confirmations exceeded 2015 numbers with over 57.82M birds affected. In 2022, 715 flock detections were reported, affecting 306 commercial and 409 backyard flocks. Experts project a lull in detections over the next couple of months, with detections rapidly increasing as spring and the migration season renews. Detections continue to be reported worldwide, including Canada, EU, and also beginning in wild birds in South America.

Now is the time to reevaluate 3D flock plans for each farm.

Farms need to develop and maintain a 3D flock plan that details how a detection on the farm would be handled, incorporating specific methods for depopulation, disposal and decontamination. Within each element of this plan, producers should include several options for each activity, including a backup plan if the unexpected occurs. In recent detections, there was no CO2 available in bulk and heaters in the area to support the preferred method or the backup method of depopulation identified in the plan. If detections continue to slow, use this time to reconnect State Animal Health agencies to review and discuss strategies. View 2022 HPAI detections and layer detections by month.

As the Fall migration continues to slow, the focus is on residential birds that remain in the area and areas in the country that host migrating birds over the winter season. APHIS wild bird detections increased to 5,552 wild birds, and precautions must be taken to keep the virus outside the line of separation (LOS) and out of barns. Strategies for wildlife biosecurity and risk mitigation were recently presented by David Marks, Certified Wildlife Biologist with USDA APHIS Wildlife Services, in a webinar for the North Central Poultry Association. Views the states with HPAI detection in wild birds.

The virus is still present in the environment across the U.S., and biosecurity remains the best defense to keep HPAI off farms.

Now is the time for producers to reeducate employees on all biosecurity practices, including hunting precautions. APHIS strongly recommends hunters wear gloves to minimize direct contact with wild birds, wash after cleaning game, and change clothing before any contact with domestic poultry. Anyone engaging in waterfowl hunting or exposure to waterfowl should not be around commercial poultry for at least 72 hours and take proper precautions, including cleaning vehicles and footwear.

In other news, see “HPAI detected in major poultry producing region in Chile,” from WATTPoultry.com.