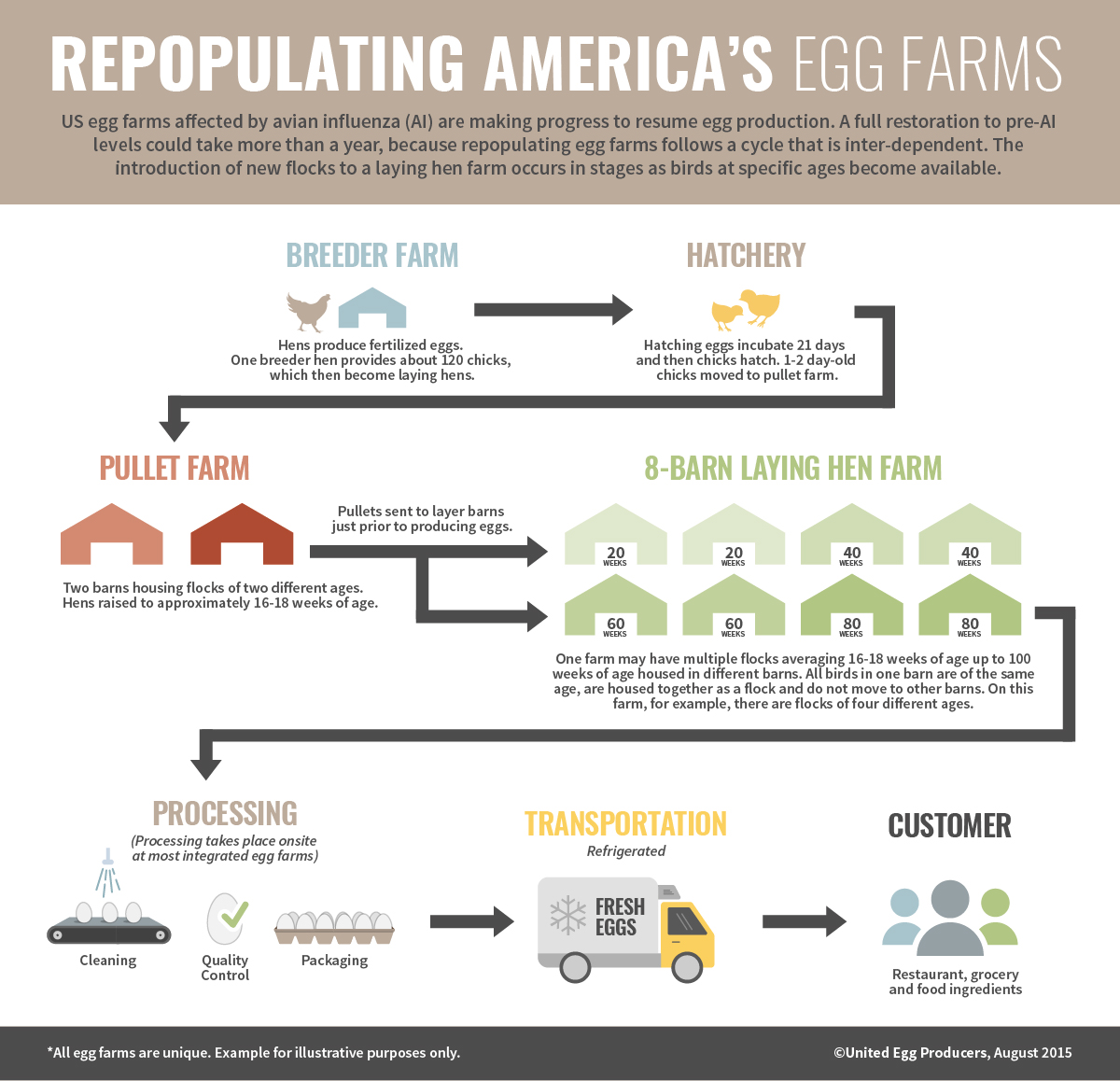 Alpharetta, Ga. (August 26, 2015) – Recovery is underway for the U.S. egg farming community after the devastating outbreak of avian influenza (AI) this spring. While repopulation of flocks on affected Midwestern egg farms continues, egg farmers across the nation are also increasing biosecurity measures and preparing for the possible return of the virus during the fall migratory season.

“Egg farmers affected by AI this spring have been working diligently and are making good strides toward resuming egg production,” said Chad Gregory, president and CEO of United Egg Producers (UEP). While some of the farms affected earliest in the outbreak time period are beginning to bring young hens back into their barns, Gregory said it will be at least 12 to 18 months before egg production returns to full, pre-AI levels. In addition, farms repopulating must meet stringent cleaning and disinfection regulations defined by USDA-APHIS, before they can repopulate.

It may take up to 80 weeks to fully repopulate some farms because the age of hens is deliberately staggered to collectively produce the right amount of eggs to meet customer needs on a consistent, ongoing basis. To further illustrate timelines and bird life stages, UEP has developed an egg farm repopulation graphic to demonstrate the complexities of repopulation to egg customers, food processors, retailers and consumers.

Adding to the challenge is a short supply of pullets, which are young hens that move into layer barns at about 16 to 18 weeks of age when they begin consistently producing eggs. This short supply has been created by the overwhelming need for more pullets at one time as egg farmers start to fill layer barns. Additionally, AI was detected on some breeder and pullet farms, which reduced the number of birds available at early stages of the repopulation process. One breeder hen provides the equivalent of 120 chicks, which makes the loss of breeder flocks even more impactful on the egg supply.

Although biosecurity and disease prevention have been a priority on egg farms for decades, the uncontrollable and rapid spread of AI this spring stymied even the best efforts of farmers and animal health experts. In response, U.S. egg farms have enhanced biosecurity measures intended to further protect their flocks, with a focus on these key areas:

• Increasing protocols for controlled movement of workers, birds, vehicles and equipment,
• Ensuring feed and water are not at risk of virus contamination and
• Limiting contact with domesticated and wild birds.

Egg farms are tightening vehicle restrictions, increasing disinfection procedures and expanding worker training. UEP has reviewed and summarized chapters of biosecurity recommendations from USDA-APHIS for its members, and the American Egg Board distributed biosecurity enhancement recommendations to all commercial egg farmers.

Methods proposed to increase biosecurity range from minor procedural shifts to large investments in equipment and facilities. All egg farmers have been encouraged to work with veterinarians and animal health experts to evaluate current biosecurity programs, consider new recommendations from industry experts, and adjust based on new learnings from AI.

“We pledge our best efforts to overcome this setback and re-build a healthy and viable egg industry,” Gregory said. “It is vital that we continue to work diligently and collaboratively to protect the health and well-being of our flocks, egg farms and rural communities.”