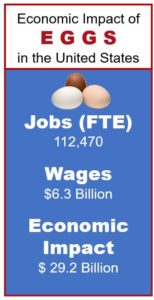 impact study on April 3.  The study highlights the poultry industry’s positive impact on jobs, wages and federal and state revenue in the United States.

The egg industry continues to be an integral part of the nation’s economy.  Egg producers along with the companies that provide supplies and materials to the industry provide well-paying jobs in the country and pay significant amounts in taxes to state and federal governments.

The data is hosted on interactive websites and then sorted nationally by state, congressional district, state house district or state senate district, and county.