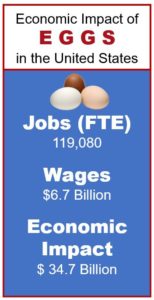 The egg industry continues to be an integral part of the nation’s economy. Egg producers, along with the companies that provide supplies and materials to the industry, provide well-paying jobs in the country and pay significant amounts in taxes to state and federal governments.

The egg industry in the United States employs as many as 24,174 people and generates an additional 94,906 jobs in supplier and ancillary industries. These include jobs in companies supplying goods and services to the industry that pay an average of $56,100 annually in wages and benefits.

The egg industry was responsible for as much as $34.7 billion in total economic activity throughout the country, creating or supporting as many as 119,080 total jobs.

The egg industry also generates sizeable tax revenues. Nationally, the industry and its employees pay $1.39 billion in federal taxes and $1.08 billion in state and local taxes.

The data is hosted on interactive websites and then sorted nationally by state, congressional district, state house district or state senate district, and county.

The economic impact study was funded by USPOULTRY and conducted by John Dunham & Associates.