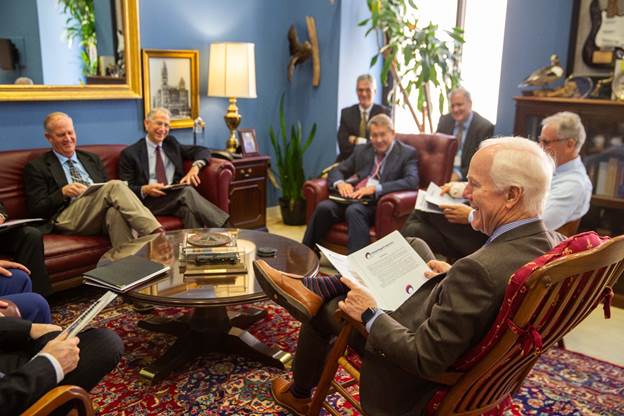 As part of the industry's annual legislative fly-in May 15-16, the United Egg Producers (UEP) is joining the call from those in agriculture for accurate food labeling. In speaking with legislators, a new discussion point focused on the industry’s desire that neither plant-based nor cell-culture products should be labeled as “eggs” or “egg products” without some qualifying term, such as “imitation,” that would inform consumers that what they are purchasing is not an egg.

Chad Gregory, UEP chief executive officer and president, noted that the milk industry has been battling for the proper labeling of milk and milk products for quite a while, and eggs are just coming into the discussion as new products have hit the market in the last year or two.

Gregory said UEP is supportive of the current Food & Drug Administration and U.S. Department of Agriculture arrangement on joint jurisdiction over cell-based meats. Many of the concerns rise from the mislabeling of plant-based products that could create consumer confusion.

Many dairy products, such as milk, yogurt and certain cheeses, have standards of identity set by regulation. The regulations were established under the foods’ common or usual names, such as “milk,” “yogurt” and “cheddar cheese.” These names have continued in common usage and are recognized by the American public as identifying the dairy foods described in the standards.

More recently, these terms have appeared in the labeling of plant-based products as part of the name or statement of identity of the product. Some examples include soy milk or almond milk and vegan mozzarella cheese.” FDA currently is soliciting input on plant-based dairy product labeling.

Similar to an FDA definition on milk from a mammalian animal, eggs also have FDA language that defines what constitutes an egg or egg product. Gregory said FDA needs to enforce that standard. The focus of UEP right now is on a regulatory track and encouraging USDA and or FDA to begin making sure products are labeled as plant based, cell based or imitation.

If more people in animal agriculture look to pursue a legislative route, Gregory said UEP may be interested in joining those efforts. In a previous Congress, the DAIRY PRIDE Act addressed deceptive labeling and branding of plant-based beverages as milk and required FDA to adhere to the standardized definition of milk.

Gregory estimated that approximately 150 egg producer owner and operators representing 70% of the egg industry were in Washington, D.C., for the annual fly-in. UEP also hosted the annual congressional omelet luncheon, which typically attracts 400 to 500 legislators and staffers.

“There’s no better way to help our elected leaders understand the challenges and opportunities of egg production than to bring the nation’s egg farmers to Washington, D.C., for face-to-face meetings,” Gregory said. “Egg producers representing states across the U.S. welcome the chance to discuss critical regulatory and business issues with members of Congress and provide their unique perspective on the impact of policy decisions on the day-to-day operations of their farms.”

Immigration was another important topic of discussions with members of Congress. UEP’s request from Congress was for a more workable year-round guest worker program for egg farms and other animal agriculture industries. UEP also seeks a visa program that is market based and includes the flexibility to help producers with year-round labor needs. The current H2-A program applies to only seasonal Source URL: https://www.feedstuffs.com/news/egg-industry-joins-food-labeling-discussion workers, and many in the agriculture industry seek additional flexibility to have access to these workers for use on farms and slaughterhouses due to the current lack of workers.

Although Gregory considers himself an optimistic person, he said he’s not optimistic that a solution benefiting agriculture can be reached in the current political environment. “There is zero optimism that something will get done,” Gregory said, adding that Congress may accomplish something on immigration overall, but it isn't likely to help the agriculture industry.

Gregory said on the animal health and disease prevention front, UEP is thankful for what USDA has done in regard to indemnity as well as efforts in the farm bill to offer additional support on future disease prevention and stamping out disease spread. UEP is urging USDA to retain flexibility to deploy funding for the Animal Disease Prevention & Management Program, as outlined in the farm bill, to pest or disease problems of greatest risk. UEP also advocated to maintain or increase funding for low-pathogenic avian influenza indemnity payments.

There have been some concerns with the Office of Management & Budget's lag in releasing funds to provide the ability to quickly stamp out diseases. With Newcastle disease or highly pathogenic avian influenza, for example, weeks can go by, allowing the disease to continue to spread.

UEP also opposes efforts in the Senate to dismantle commodity checkoff programs. “UEP is supportive of the American Egg Board, and we are strongly urging legislators to oppose and defeat any anti-checkoff bills,” he said, referring to S. 934 and S. 935. The bills, introduced by Sen. Mike Lee (R., Utah) in March, claim to bring transparency to the checkoff programs.