Eggs arrive by ship in Korea 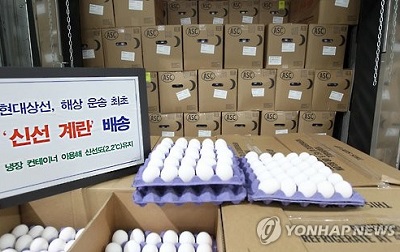 The Maritime Executive has reported that the first shipment of U.S. eggs by sea has arrived in South Korea. A Hyundai Merchant ship delivered 317,000 eggs (19 tons) of U.S. eggs to help ease the supply shortage caused by avian influenza. The ship departed Seattle on January 21 and arrived at the southern port of Busan last week. USDA AMS has certified 49,122 thirty-dozen cases as of February 4 for export to Korea.

Eggs have so far been flown into the country from the U.S. and elsewhere including Australia and New Zealand. South Korea’s average daily egg output had been 42 million eggs but has fallen below 30 million since the bird flu outbreak last year. Around 30 million birds have been culled to control the H5N6 outbreak - the worst avian flu outbreak in South Korea’s history.