Eggs: Is earlier better? Introducing eggs and peanuts to infants may be the key to reducing allergies 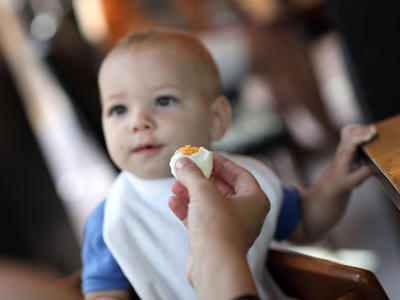 The warning is explicitly written on many products: “Made in a facility where peanuts and eggs are processed.” Anxious parents of children with such allergies search for it before putting an item in their grocery cart. Over the past decade, the number of individuals with food allergies in the United States has doubled, by some estimates. However, a new study suggests that introducing eggs and peanut products to children in their infancy may actually decrease the chance of developing allergies to those items.

Egg allergies are the second most common food allergen in the United States behind only milk and followed closely by peanuts. Researchers meticulously reviewed studies of when foods were introduced to children and how the timing was related to the development of allergies later on. Not only did they find with moderate certainty that earlier is better, they actually concluded that the ideal time to introduce eggs into a child’s diet is between 4-6 months for a 40% lower chance of developing an egg allergy. For peanuts, 4 -11 months yielded a 70% lower chance of developing an allergy.

Previous advice maintained that eggs should not be introduced until as late as three years old. With time and research, public health organizations have lowered that age of introduction significantly as study after study shows a close relationship between the age of introduction and the lack of certain allergies later on in life. The strategy doesn’t work for all foods such as wheat and it includes some fine print—for example, parents of children with eczema should consult with their pediatricians given they have a higher risk of severe reactions to food allergens.

The news is not just good for egg farmers; introducing these items to babies early may not only decrease their likelihood of developing an allergy, but also boost nutrients that are important for growing babies. One egg is naturally packed with nutrients such as vitamin D, protein, calcium, zinc, riboflavin, choline —you would have to eat a lot of different foods to equal eggs’ nutrient package. We may know even more in the near future: A major investigation by the National Academy of Medicine is nearing its conclusion, with a report expected in October. Stay tuned.