EPA has had an “Office for Environmental Justice” for many years, but EPA Administrator Michael Reagan announced last week that it is elevating that office 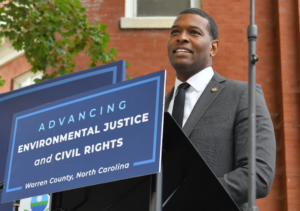 to the Assistant Administrator (AA) level and renaming it the “Office of Environmental Justice and External Civil Rights.”

This action exemplifies how the Biden Administration has made “environmental justice” (EJ) a top priority. EJ matters figured prominently in the Executive Order issued a day after Biden’s inauguration on January 1, 2021, and multiple federal agencies beyond EPA have several EJ initiatives underway as a result. For example, the Department of Justice has created a new Office of Environmental Justice and a related EJ Strategy.

EPA’s creation of this new EJ Office puts the issue at the highest level possible in EPA, similar to the Office of Land and Emergency Management (OLEM), Office of Air, Office of Water, Office of Pesticides, and EPA’s other national program offices.

Another example of EPA’s efforts in this arena, which UEP is paying close attention to, is EPA OLEM’s new EJ “action plan” applicable to its programs. The action plan requires attention as OLEM is responsible for implementing the Emergency Planning and Community Right-to-Know Act (EPCRA). This office will be conducting a new rulemaking on EPCRA in 2023, considering whether to require animal operations to report air emissions of ammonia to state and local emergency response authorities.

Reagan has not signaled enthusiasm for targeting concentrated animal feeding operations (CAFOs) with EJ efforts, and he had a moderate track record on this topic while heading NC’s environmental agency. UEP staff monitors EJ developments closely as activists opposed to modern animal agriculture often try to use racial justice arguments of highly questionable validity in their fight to prevent new facilities from being built or to stop them from operating.

The eventual nominee to serve as AA for the new EPA Office of Environmental Justice and External Civil Rights must go through Senate confirmation. The new office is also expected to go through formal rulemaking, and these steps should make the office more accountable and subject to oversight.