There continues to be a significant division between the Republican conference, with some vulnerable senators feeling a sense of urgency to pass a relief bill. At the same time, fiscal conservatives have become 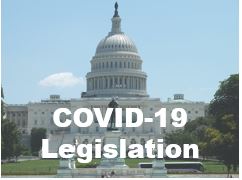 increasingly frustrated and vocal about increased spending. There seems to be bipartisan agreement around including increased funding for the Paycheck Protection Program (PPP) (and expanding the program to more entities), more funding for schools, and support for healthcare providers. Liability protection and unemployment insurance remain the most significant barriers to an agreement.

Specific to agriculture, the HEALS Act provides $20 billion for USDA to "support agricultural producers, growers, and processors impacted by COVID-19." The remaining $457 million will primarily go to USDA’s Farm Service, Rural Development, and Food and Nutrition Service agencies to cover salaries and overtime expenses for their employees. The provisions for agriculture producers were written intentionally broad to provide similar support from the CARES Act or to provide support to producers of newly enumerated crops or livestock, which are not covered by the CARES Act.

The HEROES Act, passed by the House of Representatives in May, provides $16.5 billion in direct support, which contributes to the $33 billion in total support, as estimated by the Congressional Budget Office when considering other agricultural relief and conservation efforts in the HEROES act. The HEROES Act details its use of federal dollars, such as prescribing payment rates, the methodology for depopulation indemnities, and funding for agricultural processors such as textile mills and ethanol plants. Due to the early stages of the negotiation process, it is still premature to guess the contents of the final bill.

The bill makes several improvements to the PPP for farmers. While previously farmers organized as sole proprietors would be ineligible for the program, the HEALS Act allows sole proprietors to use gross receipts instead of net profits for their payroll calculations. The bill also caps loan eligibility at $100,000 in gross receipts, simplifies the forgiveness application process, addresses restrictions related to the period of time for which funds can be borrowed, and creates a distinction for borrowers who apply for a second PPP loan.