HPAI reported in India and Ireland

HPAI continues spreading across Europe, Japan, South Korea, and China at an alarming rate, with outbreaks being reported in India and Northern Ireland.

Nine states and Union Territories in India have recorded outbreaks, with Haryana reporting over 400,000 bird deaths in the past few weeks. Northern Ireland reported its first-ever case of H5N8 at a 30,000-bird 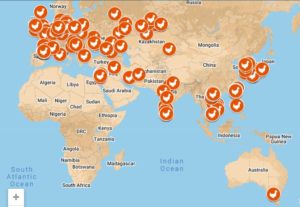 commercial premises in Clough. The incident resulted in the cull of 80,000 birds as two linked sites were also depopulated. After further investigations by Ireland’s chief veterinary officer, subtype H5N8 was found in a second poultry flock in Northern Ireland.

Wild birds continue to be detected with some variant of HPAI across Europe, including Germany, where the H5N3 HPAI virus strain was found. UEP has urged USDA Animal and Plant Health Inspection Service (APHIS) to update the industry on current testing plans for wild birds in the U.S. APHIS has scheduled a webinar for February 2, and registration information is below.

Join USDA Animal and Plant Health Inspection Service (APHIS) poultry experts for a virtual webinar. Items on the agenda are the spread of HPAI in Europe and East Asia, the U.S. wild bird surveillance program, and poultry biosecurity audits under the National Poultry Improvement Program. The webinar is from 11 a.m. to 12:30 p.m. ET on Tuesday, February 2, and is free.

Click here to register. Once registered, participants will receive an email providing instructions on how to join the webinar. Poultry producers, poultry industry associations and representatives of poultry sector auxiliary services are welcome to attend.