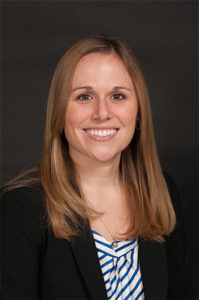 UEP is pleased to congratulate Krista Eberle-Krish, the 2018 winner of the Maurice Stein Fellowship Award.

Eberle-Krish is a Ph.D. candidate under the direction of Dr. Kenneth Anderson and Dr. Jesse Grimes in the Prestage Department of Poultry Science at North Carolina State University. Eberle-Krish is focusing on production, pre-harvest food safety, and agricultural and extension education within the egg and turkey breeder industry.

Eberle-Krish received a BS degree in animal science from Purdue University and a MS in poultry science from Mississippi State University under the guidance of Dr. Aaron Kiess. She is also a graduate of the Midwest Poultry Consortium’s Center of Excellence Program at the University of Wisconsin-Madison. Before returning to earn her doctorate, she was the Custom Vaccine Business Manager at Ceva Animal Health, where she directed the development, production, planning, and processing of autogenous vaccines.

Prior to working at Ceva, she was the Director of Food Safety for the United Egg Producers where she spent time working on food safety issues surrounding Salmonella Enteritidis. Since her arrival at North Carolina State University, Eberle-Krish has been engaged in research that gives egg producers options for depopulating laying hens in the event of a notifiable emergency disease outbreak.

The Maurice Stein Fellowship Award is granted annually to a graduate student whose training and research in applied poultry sciences may lead to improvements in efficiency and profitability of the egg industry. Priority is given to candidates whose research has the potential to have a positive effect on the egg industry.  This award was established in 1972 in recognition of UEP’s first Chairman of the Board, Maurice Stein.