Current Board Chair Tom Hertzfeld, Jr. opened the Awards Banquet, expressing the spirit of UEP. “We are like a family at Thanksgiving dinner. We sit and argue and sometimes disagree about the issues, but we are still family.”

At the banquet, UEP recognized and celebrated three individuals who have made a lasting impact on the U.S. egg farming community. 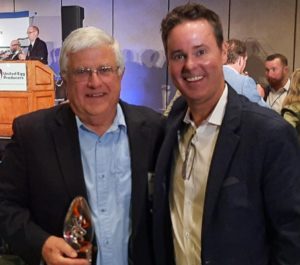 Earl Barrentine was recognized for his dedicated leadership, serving as Allied chair of the United Egg Association for the past two years. He has worked at Chore-Time for over 47 years, except for four years in the Navy. Barrentine has been instrumental in helping develop systems and products for egg production and is currently a regional sales manager. 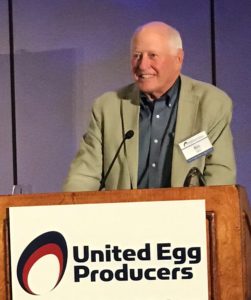 New England native and longtime egg industry advocate Bill Bell is the 2021 recipient of the UEP President’s Award. The award recognizes an individual who has made a profound impact on the egg industry and egg farming community by helping others. His service to the industry began in the 1970s when Bell organized egg producers in the Northeast in creating impactful campaigns supporting the sale of fresh, local eggs. For decades, Bell has been an industry leader in New England, promoting smart welfare initiatives. 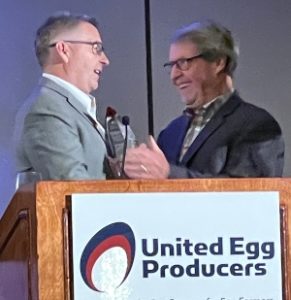 A former UEP Board Chair, Ron Truex, announced UEP’s highest honor naming Tom Hertzfeld, Jr., as Egg Producer of the Year. Hertzfeld has served in many leadership positions at UEP, including as chairman of the Government Relations Committee, a member of the Food Safety Committee, the UEP Board and the UEP Executive Committee. He most recently served as the UEP Board chair. Under Hertzfeld’s leadership, UEP has navigated challenging issues, including the industry’s cage-free transition and the COVID-19 pandemic.

UEP President Chad Gregory also thanked Steve George for his years of service as the Chair of the Environment Committee and Roger Deffner and Kurt Kreher, who are retiring from the Board.