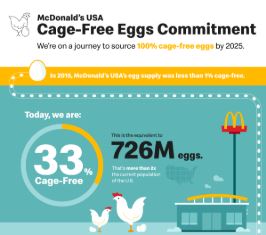 McDonald’s, the world’s largest restaurant company, recently announced­­ it is about one-third of the way toward meeting its 100% cage-free egg goal by 2025.  In a widely publicized public relations campaign, the company also released a blog post featuring supplier egg farmers, a video, and an infographic about their cage-free journey.

McDonald’s reported using around 2 billion eggs annually, or about 2% of the U.S. egg supply.  In the announcement, the company also stated the decision to go cage-free was pivotal in the U.S., with over 200 companies quickly making similar pledges following McDonald’s 2015 announcement.

According to USDA’s Agricultural Marketing Service, approximately 71% of U.S. hens must be in cage-free production by 2026 to meet projected demand.  Currently, 18.4%, or 60.7 million U.S. laying hens, are in cage-free housing.