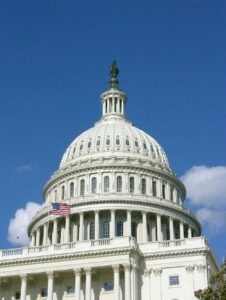 On Wednesday, Nov. 30, the House voted to deter a possible railroad strike that could halt shipments and damage the U.S. economy. In a 290-137 bipartisan vote, the House approved a measure to enforce the tentative agreement. Imposing the agreement was originally recommended by a presidential emergency board but was rejected by four of 12 rail unions. The Senate voted to pass the tentative rail agreement on Dec. 1, with a vote of 80 to 15. The House held a separate vote on a measure that would add seven days of sick leave to the contract, which was a key demand of the unions opposing the original agreement.  Although the House voted to include seven days of sick leave, the measure failed in the Senate. The final agreement was signed into law by President Biden on Dec. 2. UEP joined over 190 other agricultural organizations in sending a letter to Congress urging it to take action to prevent a rail strike that would cause devastating consequences.

The United States Department of Agriculture’s Animal and Plant Health Inspection Service (APHIS) has made $3 million in cooperative agreement funding available to design an antimicrobial resistance dashboard. An antimicrobial resistance dashboard would monitor resistance patterns, resistance profiles, and provide insight into the antimicrobial use and animal health management practices relationship. Chief animal health officials, state agriculture department officials, nonprofits and veterinary groups are among eligible groups that can receive funding. Funding will be available through Feb. 20, 2023, and can be accessed through the APHIS website.

Several farm groups’ request for an exemption on truckers hauling live animals from federal mandates limiting hours of operation was rejected by the Department of Transportation’s Federal Motor Carrier Safety Administration (FMCSA). According to a Federal Register notice published Tuesday, FMCSA said approving the request would not create safer conditions for drivers.

On Tuesday, Dec. 6, the Senate Committee on Agriculture, Nutrition and Forestry held a hearing entitled “Farm Bill 2023: Research Programs.” The hearing focused on reviewing the U.S. Department of Agriculture’s (USDA) research extension and related programs ahead of the 2023 Farm Bill. Senators also considered key issues, such as public-private partnerships and collaboration with expert stakeholders. During the hearing, one witness highlighted the importance of using agency research and information when making decisions on his family farm. He noted the need for the agriculture industry to shift toward multi-system research processes and outreach so all agricultural partners benefit.