On September 25, the Senate Committee on Agriculture, Nutrition, and Forestry met to discuss industry perspectives of the livestock and poultry sectors. Witnesses reiterated the importance of reauthorization of Livestock Mandatory Price Reporting and the need for stability through 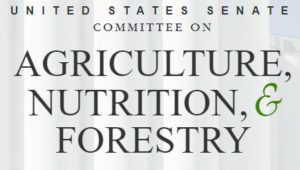 Ranking Member Debbie Stabenow (MI) finished her opening remarks with her dedication to helping these sectors while Congress works to ratify the United States-Mexico-Canada Agreement (USMCA) while mentioning that the current trade plan keeps NAFTA in place until this new deal is passed. The importance of this deal was echoed by all the witnesses, with the reasons of increased exports and duty-free access to valuable markets being the most important. Senator Joni Ernst (IA) followed with similar points about trade and highlighted the importance of USMCA as well as trade agreements with Japan and China. While most of the witnesses discussed the important role trade with China plays in each of their sectors, the representative from the National Turkey Federation responded that China is of little concern to poultry due to their ban of American poultry after the avian influenza outbreak three years ago.

Senator Richard Durbin (IL) began his questioning with a brief overview on the immigration raids at a processing facility in Mississippi. He discussed the need and value of migrant agricultural workers to each of the industries represented. Witnesses responded that the topic of immigrant workers is not solely an agricultural problem and something that should be taken into consideration for future immigration legislation. See also “Lusk: Poultry, livestock research funds needed,” from Watt Ag.