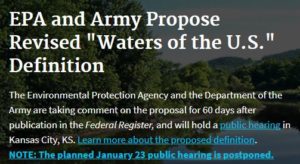 On December 11, 2018, the U.S. EPA transmitted its proposed Waters of the U.S. (WOTUS) Rule for publication in the Federal Register.  This new rule, once finalized, would supersede the previous version issued in 2015 and mired in litigation ever since.   The new proposal was expected to be published in the Federal Register on January 3 with the 60-day public comment period beginning at this time.  Due to the government shutdown, which has closed the Federal Register and EPA, the rule is not expected to be formally published until the government reopens.  EPA had also planned a series of public listening sessions about the rule which were to begin this month; these also are on hold during the federal shutdown.

One of the key purposes of the rule was to define what is and is not a WOTUS, using terms and concepts that are understandable to the average landowner or manager without a professional consultant’s help.  With some limited and important exceptions, it appears that the proposal has met this goal.  Below is a summary of its key provisions.

The proposed rule establishes six categories of features that are WOTUS:

This is largely the same as the longstanding category of WOTUS that is not in dispute.  These are waters currently used, or were used in the past, or may be susceptible to use in interstate or foreign commerce, including territorial seas and tidal waters.

Tributaries are defined as a river, stream, or similarly naturally occurring surface water channel that contributes perennial (flowing continuously year-round) or intermittent (flowing continuously during certain times of a typical year, more than in response to precipitation) flow to a TNW in a “typical year” (within the normal range of precipitation).  A tributary would still be WOTUS even if it flows through a natural or artificial break so long as, despite the break, the feature continues to convey perennial or intermittent flow.   Note that ephemeral streams (only have water flowing after a rainfall event) are categorically excluded from being WOTUS.  There is a question as to how to properly and usefully define what is a typical year, particularly as it relates to an intermittent stream, and many comments are expected on this topic. 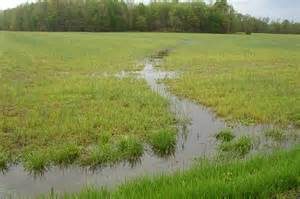 A ditch (defined as an artificial channel used to convey water) is a WOTUS if it is a TNW, if it is constructed in or relocated the flow from a jurisdictional (perennial or intermittent) tributary, or in an “Adjacent Wetland” that is a WOTUS (see below). Note that a ditch with only ephemeral flow is categorically excluded from being a WOTUS, as are any ditches that are wholly constructed in upland areas.

Lakes and ponds are WOTUS if they are TNWs, contribute perennial or intermittent flow to a downstream TNW in a typical year directly or indirectly through either a WOTUS or an excluded feature, or if it is flooded by a jurisdictional TNW, tributary, ditch, lake/pond, or impoundment in a typical year.  This is a new category of jurisdictional waters, with the key determining characteristic being whether the feature contributes perennial or intermittent flow to TNWs.

Any impoundment of the above WOTUS is also considered a WOTUS.  The agencies request comment on whether this is needed as separate category.

UEP will be submitting feedback on the proposed rule during the comment period, working closely with the Waters Advocacy Coalition.  Please contact Tom Hebert (tom.hebert@bayardridge.com) if you have any questions or comments to include in UEP’s submission.