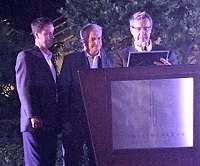 During the recent Annual Executive Conference, UEP continued its tradition of honoring leaders among the egg community with the President’s Award and the Egg Producer of the Year Award.

“Annually it is my distinct honor and pleasure to present the President’s Award to someone who goes above-and-beyond the call of duty,” Chad Gregory said as he introduced the award. The UEP President’s Award recognizes an individual who has demonstrated tremendous leadership and/or value to the egg industry and who is NOT an egg producer.

Gregory presented the 2016 President’s Award to Phyllis Blizzard, who was genuinely surprised by the recognition. Blizzard retired from UEP in May 2016 after a 30-year career that included managing the export of more than 109 million dozen eggs on behalf of United States Egg Marketers and then UEP. On a personal note, Gregory stated, “It is fitting that we are here during the “Bleau goes Pink” lighting as the Fontainebleau supports Breast Cancer Awareness Month. Phyllis is a 17-year breast cancer survivor who worked continuously while recovering from treatments in 1999 and 2013.”

Egg Producer of the Year Award

Jacques Klempf was presented the prestigious 2016 Egg Producer of the Year Award by UEP Chairman Ron Truex. An egg industry leader for many years, Klempf has served on the UEP Board and as Chair of American Egg Board, US Poultry and Egg Association and the UEP Information Sharing Committee. Jacques began peddling eggs in the neighborhood at age eight and assumed a management position during his college years, when his father asked him to oversee the 3:30 p.m. to midnight shift. For nearly 20 years, Klempf has served as CEO of Dixie Egg Co., based in Jacksonville, Fla., succeeding his father’s role in the family business that was founded in 1948.

“Last month Jacque Klempf sold his business and will no longer be involved in the egg industry or UEP,” Chairman Truex concluded. “His leadership and encouraging personality will be missed by all.”

Gregory took the opportunity this year to personally recognize the 2015 President’s Award recipient, Joanne Ivy, as she had not been able to attend the 2015 UEP Annual Conference. Ivy was presented a personalized plaque and recognized for 40 years of service to the egg community, first in North Carolina and later with American Egg Board (AEB). Ivy retired last year from AEB as President and CEO, after providing leadership for highly successful national programs that helped increase demand for eggs.

Photo Caption: Jacques Klempf is congratulated by Chad Gregory (left) and Ron Truex, in his recognition as 2016 Egg Farmer of the Year.