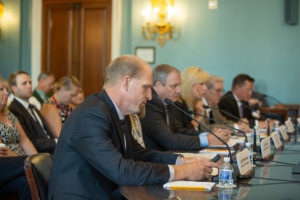 David Will second from left

The biggest challenges to animal agriculture “come from sources we can’t see,” namely the microorganisms that carry avian influenza, virulent Newcastle Disease (vND) and other animal health threats, a California egg producer told members of the U.S. House of Representatives.

David Will, general manager of MCM Poultry Farm in southern California, emphasized animal health as well as other issues in his testimony to the House Agriculture Committee’s Subcommittee on Livestock and Foreign Agriculture. Appearing July 16 with beef, pork and poultry producers, Will said biosecurity is “all-important” in preventing disease, but said in California, “our ability to combat vND was compromised by social media networks that warned of the approach of enforcement officials and encouraged people to move or hide potentially affected birds.”

Will, speaking on behalf of UEP, California egg farms and the Pacific Egg and Poultry Association, asked Congress to support a new pest and disease prevention program that was approved after strong support from UEP and other organizations. The prevention program will operate through cooperative agreements with state agencies. Will said vND shows the utility of a cooperative program like this;  “What was needed was not vaccine but boots on the ground,” Will said.

In other parts of his testimony, Will urged Congress to support adequate payment rates for indemnities and virus elimination costs in animal disease outbreaks. He also emphasized the need for “a stable, reliable and legal workforce,” urging Congressional action on immigration reform. “Current guest-worker laws focus on seasonal employment, whereas we need to care for our birds 365 days of the year,” Will said.

UEP Blogs, UEP in the News