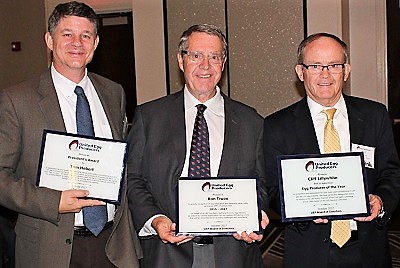 Ron Truex served a two-year term as Chairman of the UEP Board of Directors from 2015 to 2017. Truex is president and general manager of Creighton Brothers, a family-owned egg farm in northern Indiana. During his tenure as chairman, Truex guided the egg industry through many critical issues and led essential conversations about topics including hen housing, environmental responsibility, animal well-being and food safety.

Longtime UEP environmental consultant Tom Hebert, of Bayard Ridge Group, based in Washington, DC, has deep expertise and extensive understanding of on-farm environmental responsibility. Hebert received the UEP President’s Award for providing UEP and its farmer-members with expert advice and guidance on environmental issues for more than 10 years. He has helped shape UEP policy on key agriculture regulations including Waters of the U.S., air emissions and nutrient management.

Cliff Lillywhite, president of Oakdell Farms in Utah, received UEP’s highest honor, named as Egg Producer of the Year. An industry leader for more than 25 years, Lillywhite earned this distinguished award after holding several leadership roles within UEP. He has served on the Board of Directors since 2005, as Chairman of UEP’s Food Safety Committee, and as an Office Holder on the UEP Executive Committee. He also is an active leader in Utah agriculture and a generous philanthropist.

“America’s egg farmers are fortunate to have exceptional leadership within our organization, and these three men are among the best of the best,” said Chad Gregory, president and CEO, UEP. “As the recognized voice of U.S. egg producers, UEP relies on the strength and knowledge of our leadership, Board members and business partners to assure we always are representing the egg farming community well, maintaining consumer and customer confidence in egg production, and advancing the business and agriculture priorities of our membership.”

UEP also elected its new slate of Board officers at their meeting on Friday, October 20, 2017. The officers include egg producers Brian Barrett of Texas as chairman; Tom Hertzfeld, Jr., of Ohio as 1st vice chairman; Craig Giroux of New York as treasurer; and Mike West of California as secretary. Named as At-Large Board members are egg producers Cliff Lillywhite of Utah, Mike Puglisi of New Jersey, Rob Knecht of Michigan and Sandra Lausecker of Ohio.