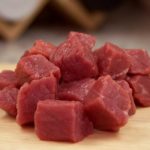 The U.S. Department of Agriculture and the Food and Drug Administration announced a joint public meeting on “the use of cell culture technology to develop products derived from livestock and poultry.”  The meeting, set for October 23-24, will focus on “the potential hazards, oversight considerations, and labeling of cell cultured food products,” the announcement said.

The meeting, which will be held in USDA’s Jefferson Auditorium at its Washington headquarters, follows another meeting that FDA called on its own.  The agency drew criticism, especially from livestock groups, for what the groups saw as an unwarranted assertion of jurisdiction.