While WOTUS (Waters of the U.S.) reform was not at the top of either President Biden’s or Administrator Regan’s environmental agendas, the Biden Administration announced plans to work on a new WOTUS rule. Its 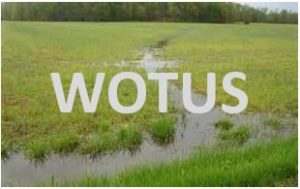 stated goal is to create a “durable” rule built from the best of the Obama-era and Trump-era rules.

The first major step EPA plans to take will be issuing a proposed repeal rule by the end of this year, or early in 2022, that would strike the Trump-era Navigable Waters Protection Rule. It will issue the final repeal rule later in 2022 and then move into an additional formal rulemaking process to craft an entirely new definition of what are WOTUS. To help prepare for the proposed rule and the work to follow, EPA will hold five “listening sessions” later this month and 10 regional roundtables in the fall.

Information about these steps, the listening sessions, and the questions EPA would like to have addressed in the sessions can be found in the EPA and the Army Corps of Engineers’ August 4 announcement in the Federal Register. UEP will be working with the Waters Advocacy Coalition, a broad coalition of industry groups, to submit written comments in response to the questions in the Federal Register notice.  If you have questions or suggestions, please get in touch with UEP staff.