Poultry producers and industry stakeholders gathered in Atlanta for the Avian Influenza Lessons Learned conference on August 30- 31 in Atlanta, GA. 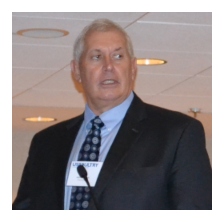 APHIS pointed out some key themes related to this year’s outbreak, including that some facilities with very high levels of biosecurity have been affected. Exposure to wild waterfowl or their droppings continues to be a extreme risk. Building maintenance and repairs to barns need to be addressed immediately. Reassess lines of separation (LOS), focus on how employees cross between them and adjust as necessary to protect your flocks.

Based on whole genome sequencing (WGS), 85 percent of the detections are from point source introductions from wild birds, not farm-to-farm spread. The virus has been detected in 2240 wild bird samples in 44 states. There have also been detections in 10 different species of mammals in 11 states. Wildlife Services intends to sample over 29,000 birds in the 2022/2023 season.

Based on early epidemiology in the outbreak, workers are the most common risk factors for bringing the virus into a facility. Feed delivery is the most common visitor to the farms. 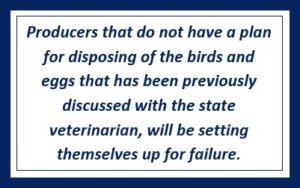 Some key vulnerabilities pointed out in multiple presentations include: Use of temporary help, contract crews, or family members not familiar with the biosecurity plan; inadequate cleaning and disinfecting of shared equipment; rendering trucks entering the perimeter buffer zone (PBA); equipment and vehicles washed inside the PBA; inappropriate placement and use of LOS; feed spills not cleaned up immediately; and discrepancies between the biosecurity plan and onsite practices. APHIS recommends a preparedness audit of all biosecurity plans, focusing on how the virus could get onto a farm. Identify the biosecurity gaps and resolve them as appropriate. Now is the time to reevaluate biosecurity plans and focus on how it is being implemented on the farm.

In addition to a biosecurity plan, every farm should have a response plan that addresses several key needs in case HPAI is found: Depopulation, disposal, site security, sources of materials, and sources for extra personnel. As the response plan is developed, start with plan A, and prepare backup plans B and C, as circumstances will change unexpectedly if your farm becomes affected. Producers that do not have a plan for disposing of the birds and eggs that has been previously discussed with the state veterinarian, will be setting themselves up for failure.  Now is the time to prepare as the virus load in the environment is increasing. Biosecurity is a farm’s best defense.