U.S. EPA Acting Administrator Andrew Wheeler signed a proposed rule to amend the emergency release notification regulations under the Emergency Planning and Community Right-to-Know Act (EPCRA) on October 30.  The rule confirms that reporting of air emission from animal waste at farms is not required under EPCRA.  This rule reflects the effects on EPCRA reporting that stem from the amendments to the Comprehensive Environmental Response, Compensation, and Liability Act (CERCLA) that were made earlier this year by Congress with the bipartisan passage of the Fair Agricultural Reporting Method’s Act. 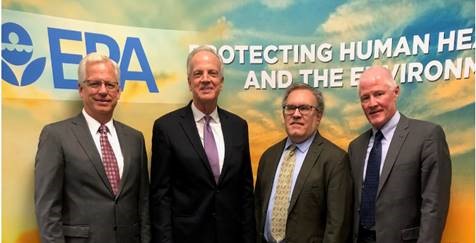 It also ensures our emergency response officials are focusing their time and resources on hazardous waste emergencies and not routine animal waste.”   Also, in attendance was Tim Gabblehouse, head of the National Association of Sara Title III Program Officials that represent Local Emergency Planning Committees (LEPCs).  Gabblehouse noted, “These reports under EPCRA too often go ignored as they do not represent emergencies to local communities. The focus of LEPCs should be and is on chemical hazards that present a meaningful risk of harm to community members and first responders.”

UEP’s statement on the issuance of the proposed rule illustrates the alliances that already exist between egg farmers and their local first responders.  United Egg Producers recently surveyed farmer-members who manage about 185 million hens or half the U.S. laying flock.  Results indicate that 96 percent of the respondents, responsible for 95 percent of the hens represented in the survey, are already in contact with their local emergency personnel on a yearly basis or more frequently.  About 75 percent of these farmers also provide direct financial support to their local first responders, and over 50 percent have family members or staff that volunteer with the first responders as firefighters or emergency medical service technicians.

UEP will provide comments on the proposed rule, due 30 days from the date it is published in the Federal Register, which is expected to take place this week.