On April 18, US EPA announced a two-stage Clean Water Act inspection plan for Pennsylvania, taking effect in 90 days, to support more aggressive adoption of nutrient loss reduction practices by the state’s farmers in the Chesapeake Bay watershed. The apparent reason for the 90-day delay is that state agriculture groups seek increased funding to support locally-led conservation district staff working with farmers at the county level to adopt conservation practices.  Many observers expect EPA to back off from these new inspections if increased funding is provided.

Pennsylvania is part of a six-state effort under the 12-year-old, federally established Chesapeake Bay Total Maximum Daily Load (TMDL) that mandates reduced nutrient losses through the states’ waterways that 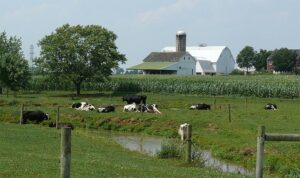 reach the bay. The details of work under the TMDL are in each state’s Watershed Implementation Plan (WIP). EPA considers Pennsylvania’s WIP to be substantially behind schedule relative to the TMDL’s nitrogen loss reduction goals for the state. Maryland and Virginia, two other states under the TMDL, have publicly called upon EPA to put more pressure on Pennsylvania to increase its level of effort.

Pennsylvania's challenge under the TMDL and its WIPs is that a large portion of its nutrients reaching the Chesapeake Bay are thought to originate on many small, Amish dairy farms that densely populate Lancaster County.  Working with Amish producers to change production systems to reduce nutrient losses is particularly challenging, technically, economically and socially.  UEP staff will monitor the situation and report back on the conservation funding and related developments with EPA’s planned inspection program.