UEP Senior VP of Regulatory Affairs Oscar Garrison, along with consultant Randy Green, attended the FDA public meeting on October 21 in Washington, D.C. The meeting was held to outline the agency’s vision and gain feedback from stakeholders on “The New Era of Smarter Food Safety.” The information provided by stakeholders during the meeting and breakout sessions will be utilized by the agency as it develops the blueprint outlining critical steps for protecting public health and keeping pace with the ever-changing global food supply chain. 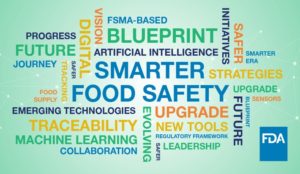 The agency outlined four areas of focus during the development of the blueprint, including tech-enabled traceability and foodborne outbreak response, smarter tools and approaches for prevention, new business models and retail modernization, and food safety culture. Each of these areas was covered during breakout sessions, and stakeholder feedback was captured by the agency.

During the tech-enabled traceability and foodborne illness response session, Garrison and Green voiced industry frustration when dealing with the agency during a potential outbreak investigation. Examples cited included ineffective communication and lack of a timeline for relaying critical information to a farm.