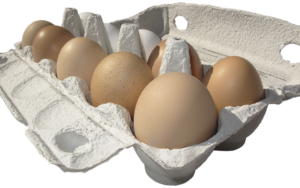 A lawsuit has been filed against Nellie’s Free Range Eggs and parent company, Pete and Gerry’s Organics LLC, over their free-range label.  The suit claims Nellie’s violates consumer trust and mistreats its laying hens.  The plaintiffs, backed by People for the Ethical Treatment of Animals, state the carton imagery, depicting a child near hens in a green pasture, indicates small farms with hens moving about outdoors and indoors.  The suit seeks class-action status.

As reported by ABC News, Nellie’s CEO Jesse Laflamme lashed out at the broader laying industry in response to the lawsuit.  “There are 300 million egg-laying hens in terrible conditions nationally, and we’re one of the few companies that does not keep a single hen in a cage.” Laflamme also stated, “What’s happening on those factory farms is so egregious. For them to ignore the caged egg industry and come after us is mind-blowing to me.”  Nellie’s farm is Humane Certified.