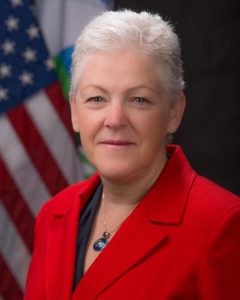 Gina McCarthy, EPA administrator, 2013 to 2017, was named CEO of the Natural Resources Defense Council (NRDC).  She has a long history of working in government environmental agencies and is known for a pragmatic approach to problem-solving.

McCarthy joined NRDC because she did not want to sit on the sidelines as policy was created. She said, “The climate crisis is the central challenge of our time” and that she wants to “work to expand NRDC’s reach and strengthen our capacity to drive needed change” on climate and other environmental matters. NRDC seeks to advance its environmental challenges through litigation, filing 96 lawsuits against the federal government under the Trump Administration.

During her tenure as the head of EPA, McCarthy was known for having a genuine interest in working with all parties.  She was not perceived as an advocate for “litigation first” policymaking. UEP members and leaders met with McCarthy in 2015 to express concerns over the pending Clean Water Act rulemaking defining what are Waters of the US.  How McCarthy’s appointment changes NRDC’s focus if at all, remains to be seen.