U.S. Representatives Veronica Escobar (D-TX) and Nancy Mace (R-SC) have introduced an amendment to the Animal Welfare Act prohibiting the extreme confinement of all U.S. pregnant pigs. Many breeding sows 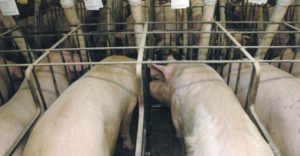 are confined to gestation and farrowing stalls for most of their lives.

A gestation stall is typically 2 feet x 7 feet and prohibits the sow from walking or turning around. These stalls are a particular point of interest for animal activists, who have worked to limit or eliminate the practice through campaigns and state laws.

Currently, ten states ban or restrict the use of gestation crates (Arizona, California, Colorado, Florida, Maine, Massachusetts, Michigan, Ohio, Oregon, and Rhode Island). Only two of these states (California and Massachusetts) have laws that will restrict the sale of pork products connected to this supply chain. Generally, this supply is more challenging to regulate than cage-free eggs, as the restriction is not on the pigs being raised for meat but on the breeding sows of the pigs raised for meat.

The proposed federal law, H.R. 7004 would make it illegal to confine a sow long term in a manner that prevents her from laying down, standing up, or turning around. The proposed law would also require a sow to have 24 square feet of usable floor space. H.R. 7004 allows for exceptions, such as transportation and medical treatment. Interestingly, the law authorizes the use of $10 million of pork checkoff dollars, which is approximately 12.5% of the annual pork checkoff funds, to aid producers in complying with the new law. Neither Representatives Escobar or Mace are on the House Agriculture committee, and it is unlikely this bill will move forward.