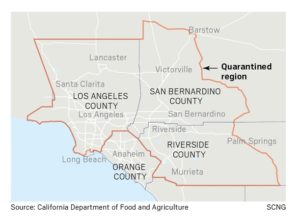 USDA confirmed one additional premise positive for virulent Newcastle disease (vND) on May 29 in backyard exhibition chickens in San Bernardino County. The number of detections is decreasing due to swift eradication efforts and increased federal involvement since funds were released by USDA Animal Plant Health Inspection Service (APHIS) to stamp out the disease. A complete list of confirmed positive premises is available on the APHIS website.

The disease has led to the euthanization of more than 1.2 million birds. Quarantine boundaries encompass all of Los Angeles, San Bernardino and Riverside counties.

California Department of Food and Agriculture (CDFA) spokesman Steve Lyle stated, “The reason for the increase in euthanized birds is detections at egg farms, where there are many, many more birds in comparison to backyard flocks.” Responding to residents’ concerns about the birds being euthanized in the quarantine region, a CDFA letter released in May stated “The diagnostic tests that are currently available do not always show detection of infected birds. If a bird has recently been infected, it may be too soon for the virus to show up in these tests. Therefore, using testing to decide which animals to euthanize in areas that are already highly infected could cause this virus to continue to spread.”

Utilizing the “stamp-out” method that is used around the world to control foreign animal diseases, the CDFA has established 1-kilometer radius euthanasia zone around the areas where infected birds have been detected. “As to when the virus will be eradicated remains uncertain, as new detections continue to pop up,” Lyle said. “The earliest the disease could be considered eradicated is four months after the final detection, but we are still regularly detecting new cases.”