One Big Storm that is Definitely Coming

One storm on the horizon is a debate in Congress over climate change legislation. Whether it is the Green New Deal championed by Representative Ocasio- 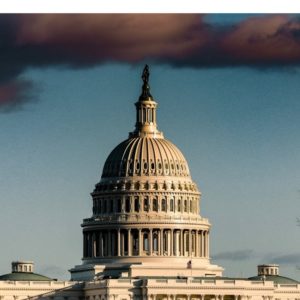 Cortez and Senator Markey, or more moderate measures like that by Senators Cornyn, Barrasso, Alexander, and Murkowski, or House Speaker Pelosi and others, there is growing bipartisan movement to respond to younger voters concerns about global warming.

Members of both parties, including an increasing number of Republicans, are now openly discussing climate change and proposing solutions that range from conservative to activist measures.  As the storm season approaches, people are anticipating climate change hearings this spring and throughout the 2020 election cycle.

In preparation for these hearings and debates, several major agricultural organizations, including UEP, collaborated to assemble a series of talking points, graphics and fact sheets to communicate agriculture’s strong sustainability performance and its implications for reducing agriculture’s greenhouse gas emissions. 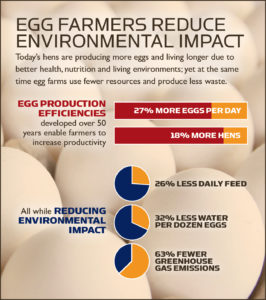 The first product of the groups’ effort,  from “Farmers for a Sustainable Future” touts the rapid and tremendous increases in agricultural productivity and output while shrinking agriculture’s environmental footprint, including greenhouse gas (GHG) emissions.

In conjunction with this effort, UEP has produced a paper for members to use in their upcoming Congressional meetings next week. “Sustainability, Greenhouse Gases, and Environmental Responsibility; the Progress of America’s Egg Farms,” summarizes the 50-year study that Dr. Hongwei Xin and others conducted and published in 2014. UEP reports on several findings from the study, including the significant reduction in GHG emissions for the entire egg sector. GHG emissions have fallen by 63 percent even while egg production has increased by 27 percent. Both documents will be available for members at next week’s meetings in D.C.  If you have any questions, please contact Tom Hebert (tom.hebert@bayardridge.com).