The Trump Administration had committed to repealing the 2015 rule and replacing it with a new rule. With the issuance of the new final WOTUS rule, the Administration has now taken these two steps. UEP staff has reviewed the rule and found that it is consistent with the version 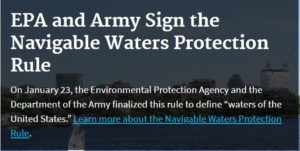 proposed last year, but with some notable clarifications as a result of the comments received by EPA. In general, the rule provides greater clarity to landowners and users like farmers, while preserving Congress’ intent, as interpreted by the Supreme Court, that jurisdictional waters have a meaningful role to play in our system of navigable waters. The NaWPR should be published as final in the Federal Register in the next few weeks, and it will take effect 60 days after that occurs. The NaWPR will be immediately challenged in federal court and, itself, subject to prolonged litigation once it takes effect.