It is possible that the 26 new cases of vND reported in Southern California from January 25 through January 31, as reported by APHIS, could reflect increased spread of the disease as the winter season begins to 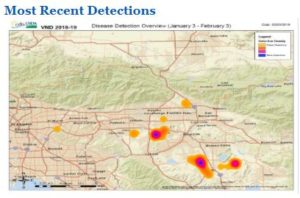 set in.   Also, as eradication efforts intensify to stamp out this disease in the backyard birds, in the short term, more detections may be found as more premises are visited and more birds are sampled.   As part of the intensified eradication effort, California State Veterinarian Dr. Annette Jones issued an order, in which all birds in certain communities in Los Angeles, Riverside and San Bernardino counties are to be euthanized.   If this intensified eradication effort is successful, the number of cases will begin to wain as the weeks pass and resources continue to increase.

Since May 18, 2018, APHIS has reported 340 cases of vND in California, and one vND case in Utah. The Utah case confirmed on January 17, was in a bird that was moved to Utah from Los Angeles County.

Of the confirmed cases to date, three have been in commercial poultry flocks, all located in Riverside County.  The first detection in commercial poultry was announced on December 15, 2018, involving a layer pullet farm of 110,000 birds.   This was followed on January 8 by detections in 159,000 layers.    The disease in another 100,000 layers was announced just two days later on January 10.

United Egg Producers, along with the National Turkey Federation, National Chicken Council, US Poultry and Egg Association, USA Poultry and Egg Export Council, and Pacific Egg and Poultry Association, will continue to work with APHIS and the California Department of Food and Agriculture, encouraging a cooperative effort of regulatory programs to eradicate and stop the spread of vND.