Where is SCOTUS going on WOTUS?

The Supreme Court of the U.S. (SCOTUS) had difficult questions for the plaintiffs and EPA on October 3 during oral arguments on a closely watched case defining what water features are Waters of the United States (WOTUS) subject to federal jurisdiction under the Clean Water Act (CWA). The breadth of the questions signaled that the justices did not yet have final answers on how to define the scope of  federal CWA jurisdiction over rivers, streams, and wetlands.

The case involves an Idaho couple, Chantell and Michael Sackett, who were prevented from building a home on their land unless they secured and complied 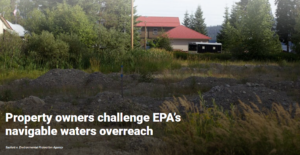 with a federal CWA permit since the project would affect a wetland that EPA said was WOTUS as it is close to a "navigable water.” The Sacketts, whose position is broadly supported by agricultural and industry groups, argue that the test for determining whether a wetland is WOTUS should require a continuous and direct surface water connection exist between the wetland and a relatively permanently flowing navigable water. The wetland must abut the navigable water and therefore be an indistinguishable part of a surface aquatic system. This definition is similar to that proposed by the late Justice Antonin Scalia in an earlier WOTUS case, Rapanos v. United States.

EPA’s lawyer argued that the simple distance or lack of a surface connection between wetlands and navigable waters is not fully sufficient to determine if the wetland is WOTUS – meaningful interactions between wetlands and navigable waters can take place at multiple distances and under varying physical conditions. EPA also noted that a similar test to the Sacketts was debated but not adopted by Congress when it amended the CWA in 1977. EPA justifies its position as close to the “significant nexus” approach articulated by Justice Anthony Kennedy in the Rapanos case (note that many dispute the accuracy of EPA’s interpretation of Justice Kennedy’s significant nexus test).

SCOTUS’ questions and associated observations during oral arguments raised the possibility that SCOTUS would not accept EPA’s broad interpretation of Kennedy’s “significant nexus” test or Scalia’s relatively permanently flowing waters test, but seek something in the middle.  But accurately predicting what SCOTUS will decide based on its questions during oral arguments has often proved impossible.  It is also impossible not to come away from that hearing with a sense that SCOTUS is seriously wrestling with something difficult to define.  A decision is expected in June or July 2023.